Taipei-based artist Anchi Lin (Ciwas Tahos) creates works that address the impact of colonization on Taiwan’s First Nations Atayal people while exploring possibilities within their indigenous culture to activate a queer space. Lin, now a permanent resident of New Zealand, has just spent a month in Aotearoa. Her current solo exhibition, Finding Pathways to Temahahoi, runs at Artspace in Auckland until August 6. Ron Hanson spoke with Lin near the end of his trip.

It took a circuitous journey for Taipei-based artist Anchi Lin (Ciwas Tahos) to begin reconnecting with her Atayal culture. The Atayal, whose roots in Taiwan date back thousands of years, are one of 16 officially recognized First Nations peoples on the island. Lin’s mother is Atayal, while his late father was Hō-ló, a Taiwanese Han. But having grown up in Taipei, Lin says her indigenous background was rarely discussed.

Artist Anchi Lin standing next to the Artspace window in Auckland where his exhibition Finding Pathways to Temahahoi is currently on view. Picture: provided

“I didn’t have that kind of cultural exposure growing up,” she says. “I have a lot of native friends from my generation. Many of them are urban aboriginal and they have a very similar experience to what I faced growing up. They didn’t have that exposure because their parents moved to town for survival and job opportunities.

As a child, Lin and her parents worked together in a factory labeling and packaging bottles of alcohol-based sanitizer. Her parents wanted to instill in Lin a strong work ethic. She worked in the factory after school and sometimes even on weekends. “It was difficult,” she says, “especially in the summer because we didn’t have air conditioning. But that didn’t bother me. She laughs, “It was a way to earn pocket money.”

It wasn’t until she moved to Canada that Lin realized she had to reconnect with her Atayal roots. In 2004 Lin moved to Vancouver and began studying computer science at Simon Fraser University. She says she needed a change of scenery. “I think that was when I came out as queer, and I had a hard time in Taiwan. My mom thought it was a good idea for me to go abroad to restructure me, knowing that her daughter is quite different. 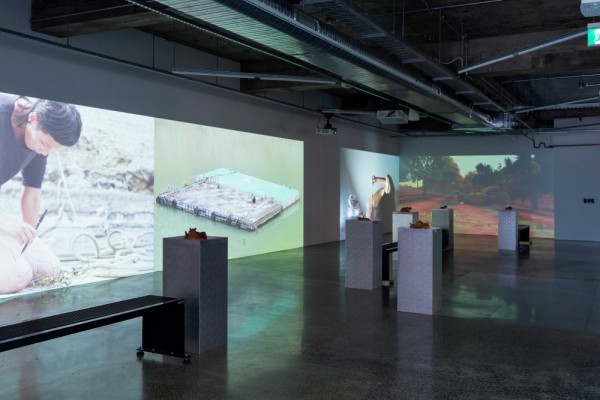 Finding Pathways to Temahahoi is inspired by the artist’s own journey into Indigenous and queer identity. Image: Seb Charles

Although she focuses on computers, Lin University required her to take art classes. This would prove to have a huge impact. After two years in school, Lin decided to major in art, even though it meant two more years of study to graduate. At art school, Lin discovered artists such as Marina Abramović and Yoko Ono. She is interested in the body as a material and artistic medium.

But it wasn’t until after graduating in 2015 that Lin really began to discover the world of Indigenous and postcolonial art. After working in an administrative position at a private First Nations art gallery in Vancouver, she began reading about the work of artists such as Rebecca Belmore and Dana Claxton. Lin also started talking to First Nations artists. “They were sharing their stories about their connection to their Indigeneity,” Lin says. “I was inspired because a lot of them came from similar situations to me.” 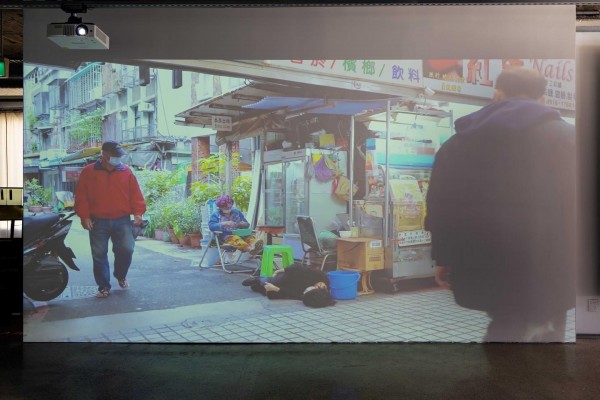 The artist reflected on his lack of Atayal consciousness growing up. “I started thinking, what’s going on?” she says. “Why is this identity of Atayal never mentioned very much? It was never highlighted or focused on. Growing up, my parents said, “Being financially stable is more important than talking about culture. »

Lin decided that she would return home to Taiwan to reconnect with her Atayal culture. In 2017, after more than a decade in Canada, she returned with her New Zealand partner Julia. The two would wed in 2019, shortly after same-sex marriage was legalized in Taiwan. Lin recently became a permanent resident of New Zealand.

After returning to Taiwan, Lin began learning her native language Squliq Atayal, one of the two main Atayal dialects. His teacher Apang Bway, who is developing a system to help people learn Squliq Atayal more easily, runs language camps in Atayal villages in the mountains. While attending these camps, Lin began visiting Atayal communities and talking with elders.

It was while traveling in the mountains of Nantou County on the way to Qin’ai Village that Lin had a particularly significant encounter. While entering a convenience store to get some water, Lin struck up a conversation with an Atayal woman outside the store. The woman told him about a place called Temahahoi where only women lived, but did not specify its origins or location. This encounter prompted Lin to begin his search for Temahahoi. 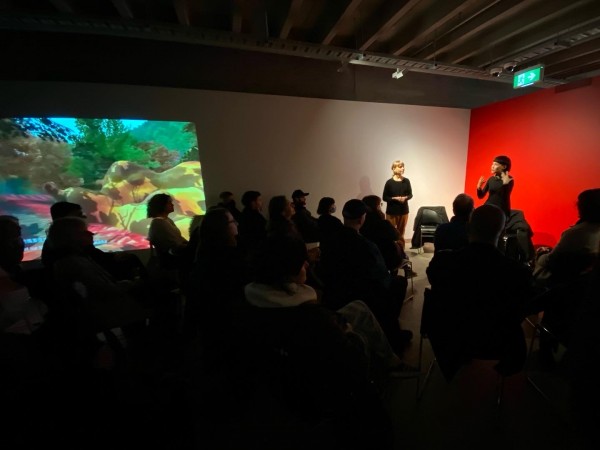 The artist found confirmation of the story in the 2017 book Heng Duan Ji by Kao Jun Hong, on mountain culture in Taiwan and the impact of Japanese colonial rule (1895-1945) on indigenous communities. Kao had recorded the oral history of Temahahoi while conducting field research in the mountains. Lin then found other recordings of Temahahoi in other books.

The stories tell the story of a community of women who lived independently without the men. Seeming to possess mystical powers, they stayed alive by inhaling smoke or steam. By lying down on a sacred rock, they could soak up the wind. Women could also communicate with bees, which protected their territory. To Lin, the Temahahoi stories sounded explicitly weird. She felt she had found a passage into a past queer space that she wanted to reactivate.

Lin started drawing on Temahahoi in his art. In her video installation “Maybe She’s From/To__Alang”, which features in the Artspace exhibition and was exhibited earlier by The Physics Room in Christchurch, Lin intertwines the stories of Temahahoi with the history of the pot in brass from the Japanese colonial period. During this time, an oral history circulated among the Atayal that many women of the tribe had become sterile after using a brass pot given to them by Japanese officials. 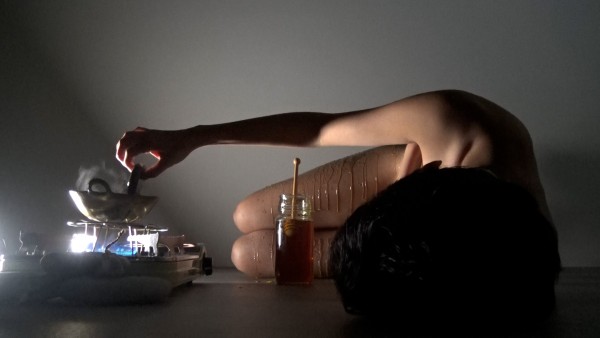 A photo from “Maybe She’s From/To__Alang” with Lin lying in a position similar to Atayal’s funeral posture. Picture: provided

The installation shows the artist lying naked in a position similar to the Atayal funeral posture near a steaming brass pot, a jar of honey and several stones. The artist takes honey with a wooden spoon and drips it over her body. She then wipes away the honey with the stones. The work extends into a 3D environment created from a scan of a black and red textile Lin has woven, inspired by the forests of Aowanda National Park. Scattered across this virtual forest are billboards discussing the impact of mining, the loss of bees and the climate crisis. Later, the Temahahoi women communicating in the Squliq dialect worry that they can no longer be impregnated by the wind.

Lin’s most recent work, “Pswagi Temahahoi”, features a self-invented wind instrument that the artist fashioned from yellow clay. Seven of the 12 series of ocarinas are part of the Artspace exhibition, while the others are on display in Germany and Indonesia as part of Documenta 15. Bulb instruments contain several mouthpieces intended for joint playing. Lin says she created them as guides to discover the location of Temahahoi.

The new work, Lin says, is inspired by an Atayal elder who showed him how to track wild bees. “It has the ability to track wild bees through sunlight and shade,” she says. “It’s a very specific technique that he learned from his father, who had learned it from his grandfather. They are very good at stalking wild bees in the mountains. When we found the hives, they were in these inconspicuous places that you would never have imagined. It’s similar to how marginalized people like gay people live in the folds of society. 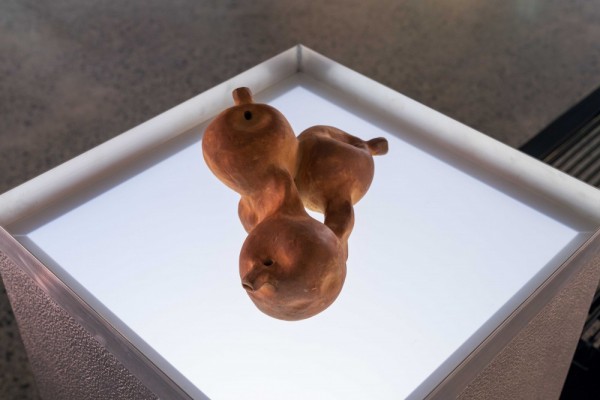 When I spoke to Lin, she was preparing to return to Taipei, where she is completing a master’s degree in new media art at the National Taipei University of the Arts. It was an enriching stay in Aotearoa where Lin found common ground with many Maori, Pacific and Asian Diaspora artists. Highlights included visiting photographer Fiona Clark at her New Plymouth studio and having dinner with Lisa Reihana. Lin had briefly met Reihana in 2018 when the artist exhibited her multimedia work “in Pursuit of Venus [infected]at the Taipei Museum of Contemporary Art. Lin also enjoyed attending Toi Te Kupu: Whakaahuatanga (Maori Arts Symposium) at the Auckland Art Gallery. She went to the South Island with the family of her companion Julia where the mountains of Te Waipounamu had a profound effect on her.

“This trip to Aotearoa has been rejuvenating,” Lin says. “This is my first trip abroad after three years in Taiwan during the pandemic. I really feel like I have become familiar with Aotearoa, especially since I have learned many Maori words along the way. of this trip. The most moving moment for me was to see people using Te Reo on a daily basis.

In recent years, there has been a growing awareness of the ancestral ties between Maori and the First Nations peoples of Taiwan. Lin is excited about the potential for new exchanges. Back in Taiwan, she organized a residency at the Taipei Performing Arts Center and invited Maori artist Kori (Sean Miles). It will arrive in early August.

“I was surprised to see how many young artists from Aotearoa that I met on this trip are interested in Taiwan,” she says, “as are many young Taiwanese artists of indigenous ancestry that I know are also interested in Aotearoa. If I meet someone of Maori origin, they will say “Kia ora Cuz”. Many Maori artists I have met really want to come to Taiwan. They said to me: ‘My father said that we were from Taiwan’. I see great potential for more exchanges.

Anchi Lin’s (Ciwas Tahos) exhibition Finding Pathways to Temahahoi is on view at Artspace in Auckland until August 6.